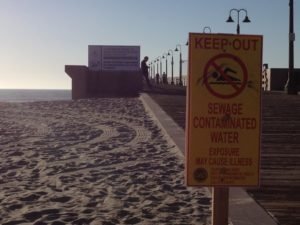 Most people who live in the South Bay of San Diego do not realize they are part of one of the most fundamental California human rights battles to take place at the beginning of the 21st century.  This battle is for Environmental Justice, are the rights of common citizens to protect their coastal homes the same as corporations.  Do these public entities have the right to take away coastal property and preclude common people from the ability to protect their family’s home.  Right now, common everyday citizens who own coastal property in Imperial Beach are facing off against the Mayor of Imperial Beach, Serge Dedina, and his powerful public relations firm Wild Coast, along with special interests such as Surfrider Foundation, the California Coastal Commission and the Unified Port District of San Diego.

Seemingly this is a David Vs Goliath battle with no hope of the little guy winning.  The argument does public entities and corporations have more rights than common person and their property rights. Both the Corporation and the common man owns coastal properties.  A Corporation has an unending life and lives only by the corporate papers in which lawyers draw up.  The common person is an individual or family who perishes.  The person may have a life-long partner or children and may leave behind an asset that passes to his daughters and sons. Do they have the same rights as corporations, of protecting their homes and assets?

These common everyday people are asking for the same rights to protect their coastal homes from Ocean storms and rising tides. Such as the City of Imperial Beach, City of San Diego and Unified Port District of San Diego have exercised.  These Public Corporations have used public taxes to protect their properties, by building sea walls and coastal public walkways on the same shoreline of the California Coast.  Why do these Corporate interests have these rights and common individuals do not?

The battle is now shaping up that these same Public Corporate interests are proposing to put into law measures which will prevent private individuals from doing the same.  The City of Imperial Beach Mayor who recently got re-elected blindsided citizens with his great idea of Managed Retreat/ Eminent Domain for the first 3 blocks of the coastal town. He is now trying to implement the Imperial Beach high-density LCP/ General Plan in which will have the most restrictive measures for coastal homes and will make it virtually impossible for the common citizen to protect their assets.  So, while these Public Corporations build protective public walkways with seawalls in Mission Beach, Mission Bay, San Diego Bay, and Coronado, Imperial Beach Citizens can’t enjoy the same protections and public investment to improve the coastal access.

This is the basis of Environmental Injustice which is treating people differently.  By using public funds to enhance one part of town and not providing the same funding for another part of town.  By disproportionally spending of public funds citizens of Imperial Beach and the South Bay are being discriminated against.

Ironically, the City of Imperial Beach and Port District have used public monies to build seawalls at the end of Palm Avenue, Imperial Beach Blvd and the Pier Plaza to protect their investments yet cannot see why common citizens should have the same rights.

The above is just one part of the story, it goes back much further and has to do with our current mayor and where he comes from along with his ability to make money through his non-profit Wild Coast while exploiting the community he is supposed to represent. As follows are snippets of a congressional Record stating facts about Imperial Beach and how our valuable sand has diminished due to blockage in the Tijuana River Valley.

(This is not some project that sprung up because some individuals looked out and said: You know, I want more beach in front of my house. No. It has nothing to do with that. It is a dangerous situation. The public is going to be paying for half of this. The Army Corps of Engineers said 100,000 cubic yards per year is eroding from the beach, corresponding to a shoreline retreat rate of 6 feet per year. There is adequate protection from winter coastal storms. That is what the Army Corps of Engineers said. That is not me speaking. I am not an engineer. I respect what they say.)

(Every 10 years, they are going to have to bring back the sand the ocean naturally washes away from the beach because we have not done what needs to be done, which is a long, extended growing, to help the beach replenish itself. beach restoration project.)

(They have a general plan. What has happened to them has been out of their control, the Tijuana River in terms of how it has been blockaded and dammed and the amount of sand that filters in and that is available for the beach. Several attempts at growing structures had been made in 1978. A plan was put forth that would have restored it. It did not meet the environmental impact statement. It was abandoned at that time.)

(So the reason the Corps recommended this particular project is they say it is very cost-effective, it provides a lot of protection for these people, and it has a very high-cost benefit. For every dollar put in, the American people get $1.70 in return, and few projects can claim such a return. Mr. COBURN. I would not know how to argue with that. Would the Senator yield for a moment, and I will finish up?)

I have a letter that I received from Dr. Serge Dedina, executive director of WiLDCOAST, supporting our amendment and asking that this money be placed secondary to the efforts in Sacramento because their studies show one winter storm will wash away what this money was spent for. This isn’t the best plan, although it is a plan and—again if I was there, I would want this beach maintained and restored. But I understand the desire for it. I understand the priorities for it. I understand the decisions that have been made in terms of lessening priorities that weren’t included in that bill. I appreciate the time the chairman of the committee has given me to offer these amendments. I ask unanimous consent that this letter is printed in the RECORD.

There being no objection, the material

was ordered to be printed in the

DEAR SENATOR COBURN: Please accept this endorsement for your amendment to the WRDA that would require that residents of Sacramento be protected from the threat of floods by the completion of the Sacramento River Bank Protection Program before federal funds are spent to add sand to beaches in San Diego (Imperial Beach).

WiLDCOAST represents the interests of Imperial Beach taxpayers who are solidly opposed to any public expenditures on beach replenishment projects in Imperial Beach We have been informed by the City of Imperial Beach staff that federally funded beach sand projects are designed to ‘‘enhance private property.’’

Our Beach Sand Stakeholder Advisory Group is formed of local Imperial Beach business owners and coastal engineering technical experts who all agree that the effort to have U.S. Taxpayers fund Imperial Beach sand replenishment is an absolute waste of scarce federal dollars. It has been scientifically proven that millions of dollars of sand that would be dumped on the beach of Imperial Beach would wash away in a single winter storm.

This executive director of Wild Coast and now our sitting mayor has exploited this issue for the last 19 years making millions of dollars and setting him up politically. Mayor Serge Dedina recently tried to pass off Managed Retreat/ Eminent Domain on his constituents while lying to them saying it’s necessary due to sea-level rise. All the while Imperial Beach’s Sea Level Rise is a man-made issue and the army corps of engineers have already addressed this issue thoroughly with a solution and our now Mayor was part of the process. As you can see in the Congressional Record from May 14, 2007, way before he was Mayor of Imperial Beach. If you have any questions please lookup the congressional Record for yourself at the link below.